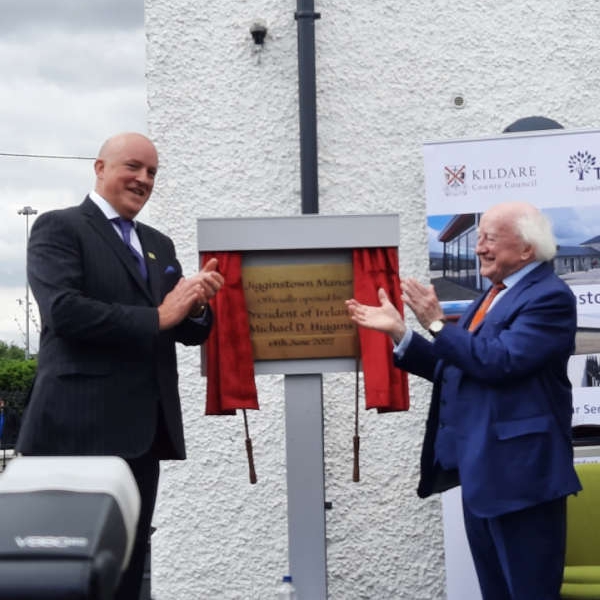 The centre will provide housing and rehabilitation supports for those affected by addiction and homelessness.

The President says the housing policy here is a 'disaster'.

Michael D Higgins was speaking as he opened a centre for homeless young adults in Naas this afternoon.

The facility in Jigginstown will accommodate seven men and five women between the ages of 18 and 25.

Jigginstown Manor operated by Tiglin will provide housing and rehabilitation supports for those affected by addiction and homelessness.

Speaking at the event in Jigginstown the President Higgins said the housing situation here has been country's biggest failure: "And I often ask myself, you know - how Republican is what we created?

"And isn't it sometimes closer to the poor law system we thought we were departing from," said President Michael D Higgins.

"It's a real challenge. I have taken as well to speaking ever more frankly in relation to housing because I think it is a great, great, great failure.

"It isn't a crisis anymore, it is a disaster," he said.

Feeling quite emotional after a barnstormer of a speech from @PresidentIRL Michael D Higgins at official opening of Jigginstown Manor in #Naas.

"We're not in a housing crisis, this is a housing disaster." pic.twitter.com/rMMVTZBi6b

Lovely day here for the visit of @PresidentIRL to Naas for the official opening of the superb Jigginstown Manor accommodation facility.

Great to see increased investment in homeless services in Co. Kildare which is desperately needed.

Congratulations to all involved!👏🏼 pic.twitter.com/K9NAXKnlal