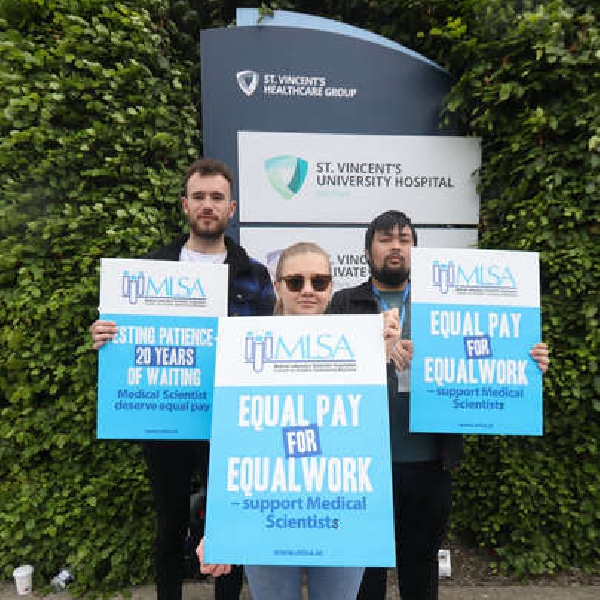 The MLSA has said the action is regrettable, but that they are being ignored by the HSE.

The Union representing Medical Scientists – the Medical Laboratory Scientists Association (MLSA) said its members are stepping up their industrial action this week – in frustration over long-standing pay and career development issues.

Two days of action are planned by the Union on Tuesday May 24 and Wednesday May 25, following an initial one day of action last week.

The action will again involve the withdrawal of routine laboratory services from 8am to 8pm on both days, affecting routine hospital and GP services across the country.

The MLSA says no approach has been made by the HSE or Department of Health to the MLSA since last week’s stoppage, despite comments from HSE representatives implying talks were ongoing.

MLSA has 2,100 members and the vast majority will be on picket lines this week, at all public voluntary and HSE hospitals and the Irish Blood Transfusion Service, which will join the pickets for the first time.

It insists if no progress is made a further three days of action are planned for next week on May 31st, June 1st and June 2nd.

Reasons for the Action

MLSA Chairperson Kevin O’Boyle said Medical Scientists did not want to be stepping up the action but severe problems and burn out in the sector are being ignored by the HSE and Department of Health – and these must be addressed.

Mr O’Boyle said the issues causing the staffing crisis in the sector are:

“All of these issues are leading to a recruitment and retention crisis. 20% of approved hospital posts are unfilled and it is not sustainable to continue like this.

"We need an effective structure for this profession which can secure the staff needed to do the work that is required.

"Resolving these issues will benefit patients and the health services they receive,” he added.

MLSA General Secretary Terry Casey commented:“Since last week’s action neither the HSE nor the Department of Health have come to us with a meaningful proposal or invitation to talks that could address the issues involved.

"It is because of this that Members throughout the country are stepping up the action."