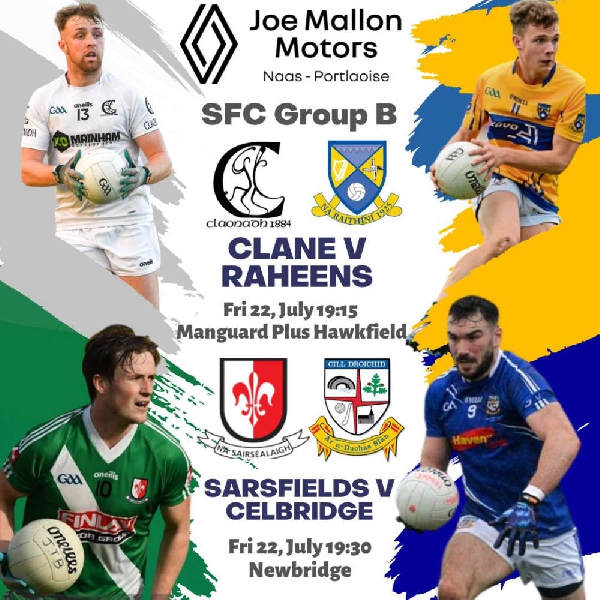 Tonight, in the first round of Joe Mallon Motors Senior Football Championship Group B:

In the first round of the Auld Shebeen Bar, Athy Intermediate Football Championship,

KFM will have live updates from 7.15pm this evening, with commentators Ger McNally & Seamus Dillon, in association with Pat Keogh Skoda, Ballybrittas.

Moving to Saturday, in the Joe Mallon Motors SFC - games to be played in Newbridge:

In Hawkfield, again on Saturday:

Clogherinkoe V Kilcock in at 4.30pm

Round Towers V Carbury at 6pm

In the Auld Shebeen Bar, Athy IFC on Saturday, in Hawkfield,

In Kilcullen GAA, Group A:

On Saturday, KFM will have updates from both the senior & intermediate championships 12 noon - in association with Pat Keogh Skoda, Ballybrittas.

Sligo Rovers manager John Russell says he's "unbelievably proud" of his players after their win at Motherwell in the Europa League qualifiers.

Aidan Keena's first-half strike gave them a 1-0 victory against the Scottish Premiership side at Fir Park last night.

Saint Pat's will go to Slovenia next week with their tie delicately poised against Mura.

Chris Forrester scored just before the hour to earn a 1-1 draw for the Saints in last night's first leg at Richmond Park.

Dundalk have the chance to cut the gap to SSE Airtricity League Premier Division leaders Shamrock Rovers, to six points this evening.

Basement side UCD look to build on their recent win at Sligo when they take on Shelbourne in a Dublin derby at Belfield.

First Division leaders Cork City are away to Wexford with second place Galway on the road to Athlone.

Eight-time winners Germany are through to the semi-finals of the Women's Euros after a 2-0 victory over Austria.

England will find out their last-four opponents tonight - as Sweden take on Belgium in their quarter-final.

Donegal’s Mark English has narrowly missed out on a place in the 800 metres final at the World Athletics Championships.

The Finn Valley club man was fifth in his semi-final in Oregon overnight.

Louise Shanahan didn’t progress to the semis after finishing fifth in her 800 metres heat.

The former England dual-code international is reportedly one of the potential candidates to succeed Eddie Jones after next year's World Cup.

Farrell is under contract with Ireland until the end of the tournament in France and Sweeney says both Farrell and Mike Catt are "doing very well" in their current roles.

Leona Maguire and Stephanie Meadow have tee-ed off their second rounds this morning, at the Evian Championship.

Maguire is one-under-par with Meadow level-par.

Darren Clarke and Padraig Harrington are both in contention, heading into day two at the Senior Open.

Clarke is due out on course from five-under-par at 8.40am - he’s currently just one shot off the lead.

Harrington will tee off this afternoon from four-under-par.

The Dane takes a 3 minute 26 second lead into today’s 188 kilometre ride to Cahors.

The going is good, good to firm in places this morning ahead of a seven-race meeting at Cork, where the first is off at 5.15pm.