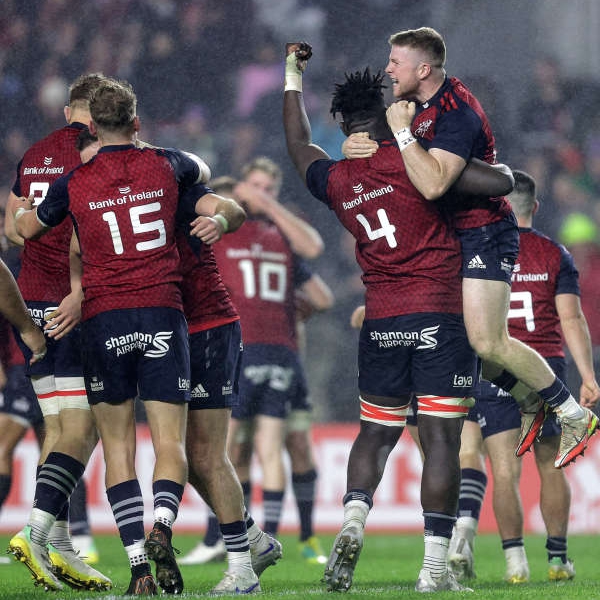 Manchester City & Liverpool Paired In Fourth Round Of The Carabao Cup

Having beaten Australia and New Zealand in the past, they overcame South Africa 'A' at Cork's Páirc Uí Chaoimh.

It finished 28 points to 14 in favour of the hosts, with Munster running in four tries.

==
Ireland conclude their preparations today for tomorrow's test against Fiji.

Tadhg Furlong captains the side, with Stuart McCloskey also fit to start after sustaining an arm injury last weekend.

Five Kildare players have been named in the squad Suncroft's Cian Prendergast, Athy's pair of Joey Carbery and Jeremy Loughman.

The Eadestown pair of Tadhg Beirne and Jimmy O'Brien have been named in the second row and at full back respectively.

Manchester City and Liverpool have been paired together in the fourth round of the Carabao Cup.

United will face Burnley next, while Newcastle will host Bournemouth.

In the other ties, Wolves take on Jillingham, Southampton face Lincoln City and Brighton go to Charlton.

Those games will take place the week beginning the 19th of December - straight after players return from the World Cup break.

The final place in next season's SSE Airtricity League Premier Division is up for grabs this evening.

UCD take on Waterford as the students look to hang onto their spot in the top tier.

Kick-off in their promotion/relegation play-off at Richmond Park is at a-quarter-to-8.

The game throws in at 7.30pm in Manguard Plus Hawkfield on Pitch 2 .

Throw in at in Manguard Plus Hawkfield on Pitch 1 is at 8:00pm

He's one shot off the lead on five-under-par in Arizona, after an opening round of 66.

The Dubliner still has a chance to win the Charles Schwab Cup, which is the Order of Merit title.

But Steven Alker - who leads the overall standings - has a share of the lead on six-under.

Harrington must win this week's tournament to have any chance of reaching the top of the rankings.

Yesterday's play was cancelled due to extreme weather conditions and the competition has been reduced to 54 holes.