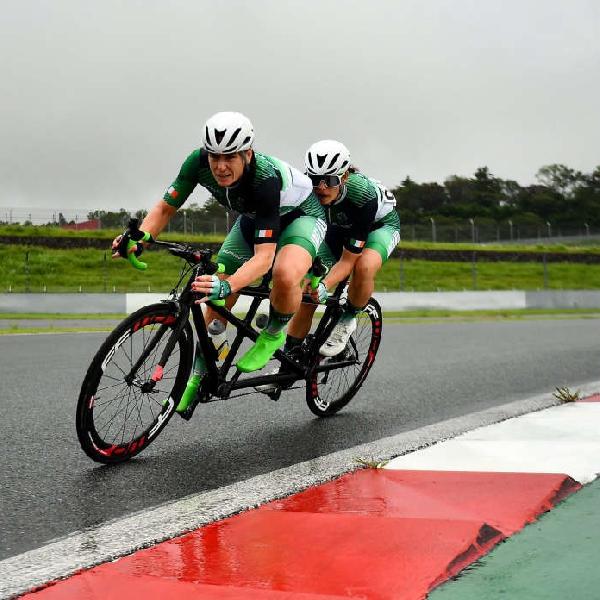 Busy weekend on the local GAA front - there is one Tom Cross Junior Football Championship fixture this evening, Grangenolvin face Rheban in St. Laurence's, at 8.30pm.

KFM will have live coverage of all the weekend's games both tomorrow & Sunday, from midday.

Cyclists Katie-George Dunlevy and Eve McCrystal have won their second gold medal of the Paralympic Games.

They claimed victory in the B road race in Tokyo in a time of 2 hours 35.53 seconds.

With 2 golds and a silver for the entire Games, Dunlevy and McCrystal have surpassed their performance in Rio.

It's Team Ireland's seventh medal of the Games.


Earlier, Martin Gordon and Eamonn Byrne withdrew from their B road race.

In canoeing, Patrick O’Leary ended 9th in the KL3 category, winning the B Final.

Swimmer Patrick Flanagan was 17th in the SB6 100 metres backstroke.

England manager Gareth Southgate says the racist abuse of his players is 'unacceptable'.

It's just the latest in a string of racist and homophobic incidents involving Hungary fans.


Elsewhere last night, Northern Ireland collected a first win in Group C with a 4-1 victory away to Lithuania.


Meanwhile, goalkeeper Gavin Bazunu has urged Republic of Ireland fans to get behind the team.

The Boys in Green will play in front of supporters for the first time in almost 2 years against Azerbaijan in Dublin tomorrow.

Bazunu says the performance against Portugal can give everyone heart:

The Republic of Ireland's under-21's begin their European Championship qualifying campaign this afternoon.

Jim Crawford's side are away to Bosnia-Herzegovina from 3.30pm.

In his bid for a calendar year Grand Slam, Novak Djokovic defeated Tallon Griekspoor 6-2, 6-3, 6-2 in the second round of the US Open in New York.

Rory McIlroy goes into day two of the Tour Championship in Atlanta on 4 under par.

He shot a 2 under par round of 68 at East Lake yesterday.

Patrick Cantlay remains the man to catch on 13 under.

There's an eight-race card at Kilbeggan this evening, with the first off at 4.05pm.

While at Down Royal, an eight-race programme gets underway at 3.45pm.