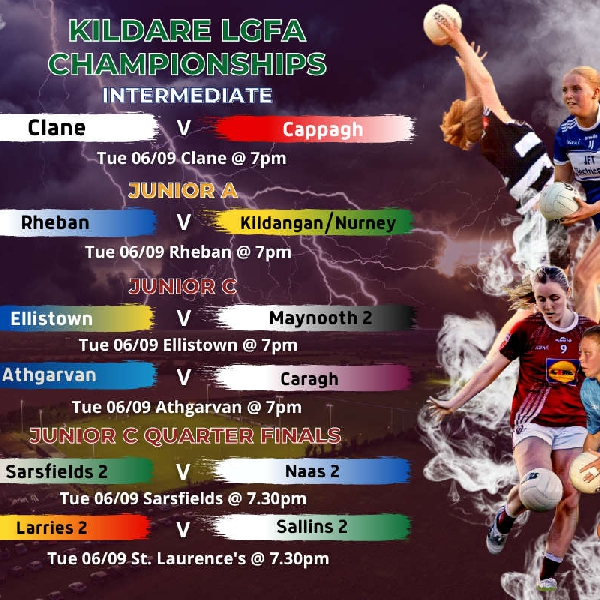 Action in the Ladies Intermediate Championship this evening:

In the Junior Championship:

Offaly are set to appoint Johnny Kelly as their new senior hurling manager.

Kelly - who served as a coach under Fennelly - is currently in charge of Tipperary club side Nenagh Eire Óg.

Republic of Ireland manager Vera Pauw says she isn't concerned by the absence of some key players for tonight's World Cup qualifier against Slovakia.

The Girls in Green know they've already secured a play-off spot - but a win in Senec will put them into the second round of the play-offs.

Megan Connolly, Ruesha Littlejohn, Jamie Finn and Niamh Fahey are all poised to miss the game.

Kill's Haley Nolan & Blessington's Louise Quinn will be involved with the squad.

Kick off is at 5pm Irish time.

They take on the holders Real Madrid at Parkhead from 8pm, in Group F.

At the same time in Group G, Manchester City meet Sevilla in Spain.

Elsewhere, Pierre Emerick Aubameyang could be poised to feature for Chelsea after his move from Barcelona.

Diego Costa's proposed move to Wolves could now be in doubt.

His application for a work permit has been rejected.

Wolves have appealed the decision.

None of the remaining players in the men's singles at the US Open has won a Grand Slam tournament.

Rafael Nadal was knocked out in four sets by Frances Tiafoe in the last 16.

In the quarter finals later today, Casper Ruud is up against Matteo Berrettini, with Nick Kyrgios to play Karen Khachanov.