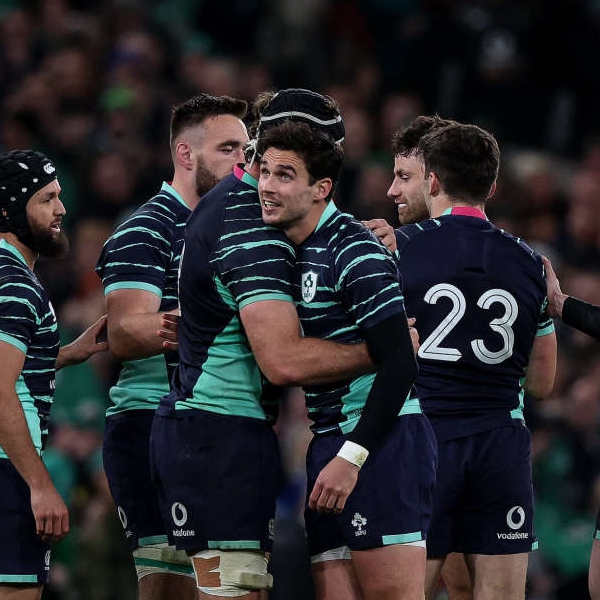 Eire Óg Chorra Coill will play Horeswood of Wexford in St. Patrick's Park, Enniscorthy on Saturday at 1.30pm, in the quarter-final of the AIB Leinster Club Junior Hurling Championship.

Elsewhere on Satuday, in the Senior Quarter Final:

The Irish rugby squad are training today as they prepare for Saturday's test with Fiji.

Conor Murray has been ruled out of the remainder of the Autumn Nations Series with a groin issue.

Robbie Henshaw and Stuart McCloskey could feature next weekend, while Johnny Sexton is recovering from a dead leg.

There have been suggestions Sexton will be rested, with Athy's Joey Carbery starting - but former Leinster out-half Andy Dunne says the captain could also benefit from playing:

Katie McCabe feels the staging of the men's World Cup in Qatar this year is "not a good look for football".

The tournament begins on the 20th November, with the host nation facing Ecuador.

The Republic of Ireland captain admits she'll be busy playing club football but has no interest in watching the tournament.

Homosexuality is illegal in Qatar.

McCabe - who has come out publicly - hopes that the World Cup passes off without incident:

A former Qatar international has stated homosexuality was "damage in the mind".

The comments were made by during an interview, Khalid Salman - an ambassador for this year's World Cup.

Salman added "they have to accept our rules here."

The interview was stopped shortly after, by an official.

To date World Cup organisers, have declined to comment.

On Friday it was revealed FIFA had written to all 32 nations taking part in the tournament, urging them not to get involved in any political controversies - and just focus on football.

Two Irish managers will bid to lead their sides into the fourth round of the Carabao Cup tonight.

Graham Coughlan takes his Newport County side to the King Power for a meeting with Leicester.

Elsewhere, Bournemouth take on Everton in the only all Premier League tie.

Southampton are set for talks with Luton boss, Nathan Jones regarding their managerial vacancy.

The Saints fired Ralph Hassenhuttl yesterday, with the club currently in the Premier League's bottom three.

The football club been given permission to speak with Jones after Luton's meeting with Stoke in the English Championship tonight.

Liverpool supporters' union, Spirit of Shankly, hope to be consulted should there be any sale of the Premier League club.

Owners Fenway Sports Group say it would "consider new shareholders" if it was in the team's "best interests".

Jordan Brown is in UK Championship qualifier action this afternoon.

There’s an eight-race card at Fairyhouse this afternoon, with the first going to post at 12.20pm.