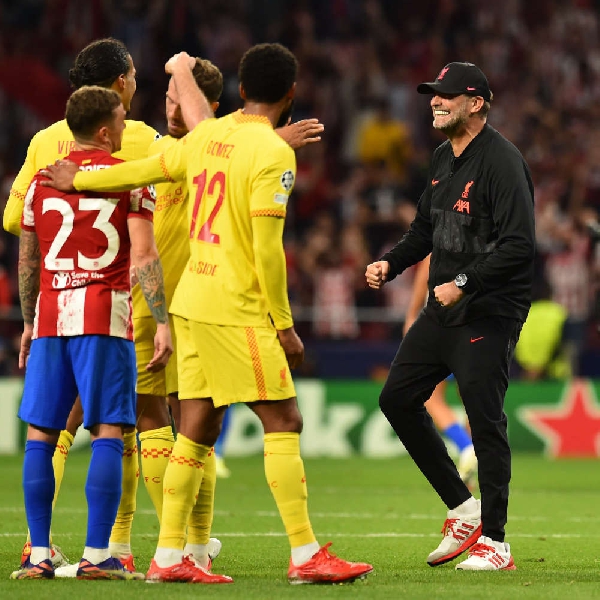 Antoine Griezmann scored twice to level the game at 2-2, before being shown a red card for a high boot on Roberto Firmino.

Liverpool have maximum points from their first three Group B games, and the sides meet again at Anfield in a fortnight.

Klopp says Atletico Madrid boss Diego Simeone was probably angry with the "game and the world" after last night's game.

The Argentine stormed down the tunnel at full-time, without shaking hands.

The Reds boss had previously criticised Atletico's style of play.

But he doesn't think that was the problem:

Elsewhere, Lionel Messi's second half brace saw Paris Saint-Germain come from 2-1 down, to win 3-2 at home to RB Leipzig.

PSG are a point clear of Manchester City at the top of Group A.

City were 5-1 winners at Club Brugge.

Pep Guardiola was full of admiration for his players:
 
Ole Gunnar Solskjaer has been defending his position ahead of one of his most important weeks as Manchester United manager.

Kildare also plan to back Proposal B at special Congress this weekend.

The GAA could reveal their position regarding the football championship proposals facing Special Congress today.

Delegates are due to vote on two proposals on Saturday, to radically alter the football championship.

Meath, Clare and Tipperary have all declared their intention to vote for Proposal B.

There has been a change of venue to tonight's Manguard Plus Minor D Football Championship Semi-Final.

Abbey Rangers will face Celbridge in Ellistown, at 7.30pm.

Ireland face their sternest challenge of Group A at the T-20 World Cup this afternoon.

After Monday's win over the Netherlands, they go up against the team ranked tenth in the world - Sri Lanka.

Play gets underway in Abu Dhabi at 3pm, Irish time.

There's an eight-race card at Navan this afternoon.