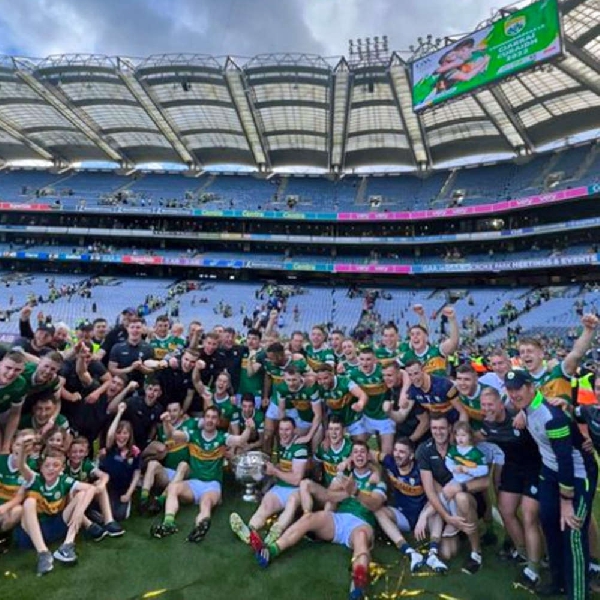 Kerry are the All-Ireland football champions for 2022.

The Kingdom claimed their first title in eight years with a 20 points to 16 win over Galway at Croke Park yesterday.

David Clifford top scored for the winners with eight points, while Shane Walsh contributed nine points for the Tribesmen.

It's Kerry's 38th triumph - moving them eight ahead of Dublin on the roll of honour.

Local results over the weekend, in the Joe Mallon Motors SFC:

Darren Clarke completed a unique double yesterday as he clinched the Senior Open title at Gleneagles.

The Tyrone man finished on ten-under-par - one shot better than Padraig Harrington.

Clarke birdied the 18th to hold off the Dubliner, who carded six back nine birdies.

Having won the Open in 2011, Clarke becomes just the fourth player to win the regular Open and the senior title.

Sarah Lavin missed out on a place in the final of the 100-metres hurdles at the World Athletics Championships overnight.

The Limerick native finished fifth in her semi-final in Oregon overnight in a time of 12.87 seconds.

The Donegal man clocked a time of two hours, 33 minutes and 31 seconds.

Jonas Vingegaard says his childhood dream has come true after winning the Tour de France for the first time.

He crossed the line safely at the end of the final processional stage in Paris.

England's women have received a boost ahead of Tuesday's Euro 2022 semi-final.

Aston Villa goalkeeper Hannah Hampton has re-joined the squad after recovering from Covid-19.

She missed the quarter-final against Spain after testing positive for the virus.

The Galway Racing Festival gets underway this evening.

Patrick Mullins will be aiming to win the the summer’s most coveted amateur prize, the Connacht Hotel Handicap at the 16th time of asking.

He rides the favourite 'Echoes In Rain' for his father Willie in the day one feature, which goes to post at 6.20pm.

The first of seven races in Ballybrit goes to post at 5.10pm.