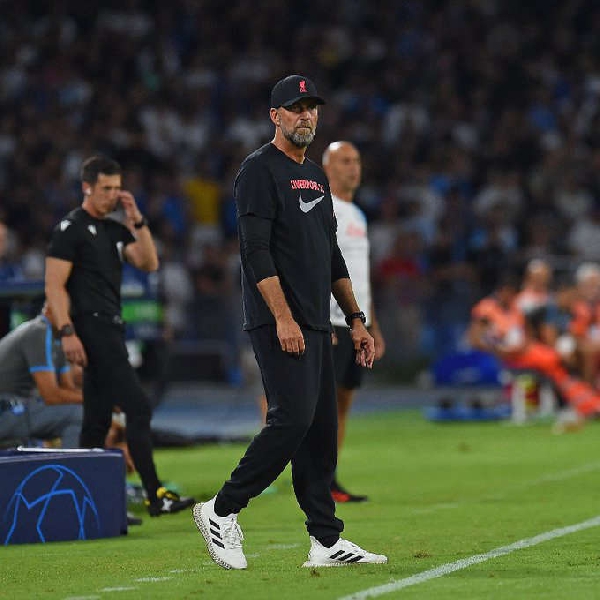 Liverpool suffered a heavy defeat in their opening game in the Champions League last night.

Jurgen Klopp's side conceded three first half goals in a 4-1 loss to Napoli in Group A.

The manager was asked if he is worried about his job in the wake of Thomas Tuchel's sacking at Chelsea:


Carragher’s deep dive into #LFC at the minute is a must watch. pic.twitter.com/5Bdhut5wZN

Elsewhere in the same group, Rangers were hammered 4-0 by Ajax.

In Group D, Tottenham got their campaign off to a winning start.

Richarlison scored both goals in a 2-0 win over 10-man Marseille in north London.

They welcome Swedish side Djurgardens to Tallaght Stadium.

Kick off for their Group F encounter is at 8pm.


Arsenal and Manchester United both play their opening games in the Europa League tonight.

The Gunners go away to Zurich in Group A from 5.45pm.

United are at home to Real Sociedad in Group E from 8.

This evening, in the Tom Cross Transport Junior Football A Championship two games to be played in Hawkfield.

Four Irish players are in the field for the BMW PGA Championship at Wentworth, which is underway.

Fresh from his Fed Ex Cup triumph, Rory McIlroy tees off at 8.30am, alongside Billy Horschel and Matt Fitzpatrick.

Shane Lowry is out immediately afterwards alongside Justin Rose and Tommy Fleetwood.

Graeme McDowell and Jonathan Caldwell also tee it up in Surrey.


Leona Maguire and Stephanie Meadow are both in the field for the Kroger Queen City Championship on the LPGA Tour in Cincinnati.

Meadow tees off shortly before 1pm Irish time, with Maguire out just under an hour later.

American Frances Tiafoe is into the semi finals of the men's singles at the US Open.

He beat Andrey Rublev in straight sets in New York.

Tiafoe will face Carlos Alcaraz in the last four.

The Spaniard has beaten Jannik Sinner in five sets.


In the women's singles, Iga Swiatek beat Jessica Pegula in straight sets and will face Aryna Sabalenka in the semi finals.

Ciara Mageean returns to the track this evening, less than a week on from setting a new 1500 metre Irish record.

She takes her place in the Diamond League final in Zurich.

There's a six-race card at Laytown this evening.