Up-Date: A Man Has Died Following This Morning's Collision On The M9, After Castledermot 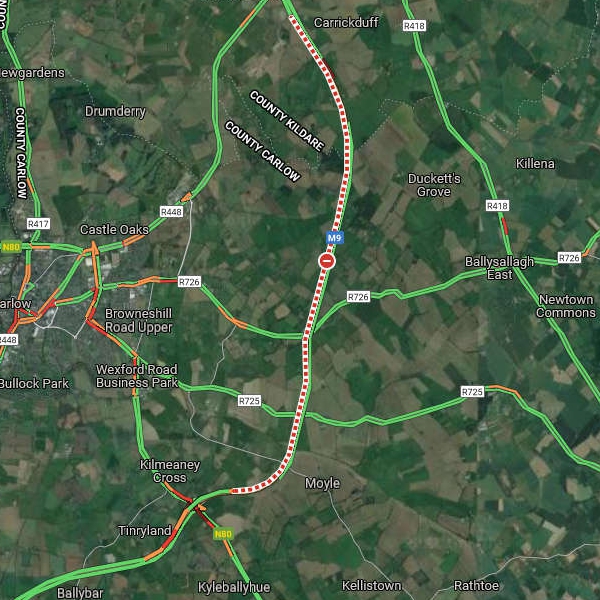 2 other people were injured and the road has now re-opened.

The M9 remains closed after Castledermot.

It follows a serious collision, which took place there at around 7.30 this morning.

Motorists are being diverted through Carlow town which is causing traffic delays this morning.

Traffic is being diverted via Carlow Town, which is having a knock-on effect on journey times there.

Gardai confirmed after 8am that both bores of the motorway are closed:

Update: The M9 is now also closed between Junctions 5 and 4 Northbound. Traffic diversions are in place. Motorists are advised to take alternative routes.

On Wednesday lunchtime, Gardai confirmed that three people were injured in the collision.

A man in his 80s who was the driver of one of the cars was taken to hospital in a serious condition.

The driver of a second car, a man in his 30s was airlifted to hospital, while a woman in her 20s who was driving a third car sustained non-life threatening injuries.

On Wednesday afternoon, Gardai confirmed that the man in his 80s had died.

The deceased man was the driver of one of the three cars involved in the collision.

A man in his 30s who was another driver was airlifted to hospital in a serious condition, while a woman in her 30s who was driving the third car sustained non-life threatening injuries.

The road has since reopened following examinations.