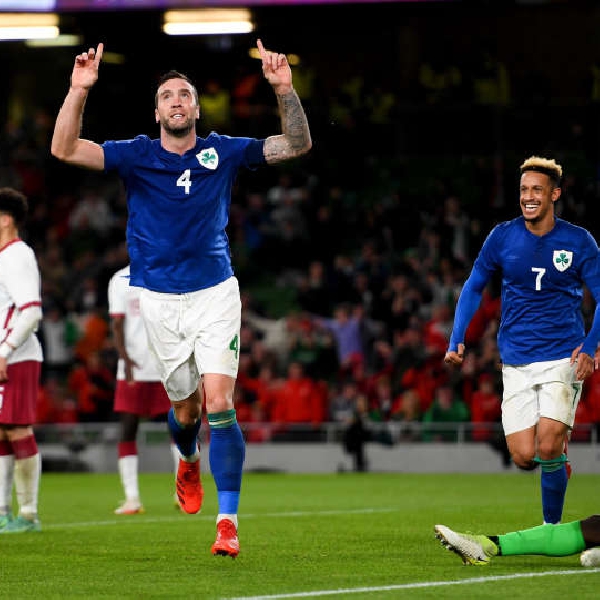 Callum Robinson scored a hat-trick as the Republic of Ireland thrashed Qatar 4-0 in a friendly last night.

The West Brom forward is the first player to score three times in a game for Ireland since Robbie Keane.

The Polish team was bombarded with drink bottles from the stands, after taking what proved to be a match winning 1-0 lead in Tirana.

Both teams left the pitch for over 20 minutes following the incident before the game was played to a conclusion.

Serbia continue to lead Ireland's group after a 3-1 home win against Azerbaijan.

Ian Baraclough's side took the lead against Bulgaria in Sofia, but conceded twice in the second half of a 2-1 defeat.

They're now 9 points behind second placed Switzerland, with just two group games left to play - putting a play-off place out of reach.

Lyndon Dykes scored a dramatic late winner to claim the 1-0 win in the Faroe Islands.

England's qualifying campaign hit an unexpected snag last night - after they were held to a 1-1 draw by Hungary at Wembley.

Manager Gareth Southgate called the result a "big disappointment" after his side came from behind to rescue a point.

England remain 3 points clear at the top of their group with two games remaining.

Meath GAA chairman John Kavanagh has called for "unity" after Andy McEntee won a vote to remain as their senior football manager.

The County Board Executive had recommended not retaining McEntee for a sixth year but 46 of 73 clubs voted against that proposal last night.

Kavanagh says it's now time for the Royal County to park divisions and to move forward under McEntee.

Bundee Aki looks set to come straight into the Connacht team for their derby with Munster in the United Rugby Championship this weekend.

The Ireland centre has returned to training following an extended break after touring with the Lions this summer.

Connacht senior coach Pete Wilkins says it's "extremely important" to have Aki back for Saturday's trip to Thomond Park.

New rules will give golf competitions the right to limit the length of clubs being used from next year.

Other than a putter, clubs can currently be a maximum of 48 inches - with this soon to be limited to 46 inches.

It's part of a plan to limit the distance travelled by balls in the modern game.

There’s a seven-race card at Punchestown today, with the first off at 1.15pm.